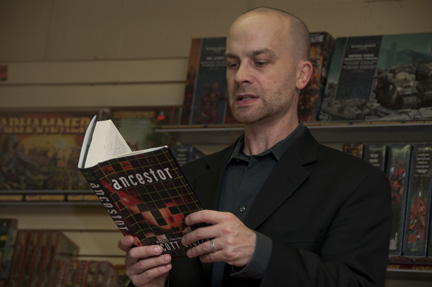 I finally got the chance to meet the Future Dark Overload (FDO) himself, Scott Sigler (www.scottsigler.com), in person at Pandemonium Books & Games (www.pandemoniumbooks.com) on Wednesday, June 23rd, 2010, where he was doing a reading from his latest novel, ANCESTOR. I video taped the event and posted it on YouTube.

There are several video segments to view. All tolled, the reading and question & answer session lasted almost 70 minutes. This meant chopping the video up into 10-minute chunks to adhere to the YouTube time constraints. After producing the seven (7) segment project, I realized that not everyone may want to sit through the whole thing, so I edited the event down to 10 minutes. This summary video contains a condensed version of the reading and the signing, but none of the question and answer period.

For the intro and outro, I used the pre- and post-roll video Scott Sigler produced for the ANCESTOR video contest (www.scottsigler.com/videocontest). The challenge was to modify the video to remove the references to the contest and insert text referencing the book tour. I pulled the footage into After Effects and overlayed the new text to cover the original text. It’s not nearly as clean as the original, but it’s only on screen for a short time so I think it works quite well. 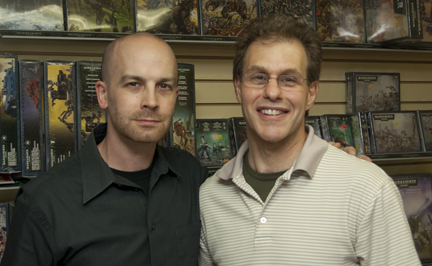 I did have moments of trepidation as I edited Scott’s reading. I kept thinking that he might not approve of what I kept in the video — that he would have edited it differently based on his desire to communicate certain things to the viewer. I hope Scott approves!

The final bonus of the evening was having Scott sign my copies of ANCESTOR — both my new one and the original published in soft cover many years ago by Dragon Moon Press (www.dragonmoonpress.com). After the reading, everyone headed over to Tommy Doyles in Cambridge (www.tommydoyles.com) for beers.