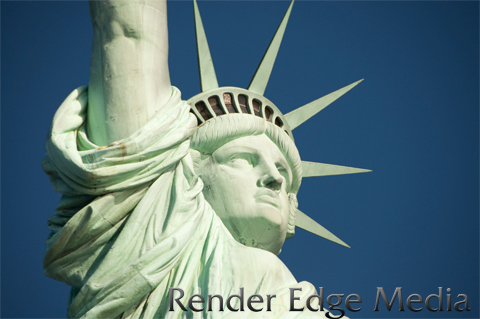 The Statue of Liberty.

My wife and I visited the Statue of Liberty over the Thanksgiving holiday. Even though I grew up just outside New York city, I had never visited Liberty Island before. We reserved tickets on-line the previous evening and boarded the first Ferry ride at 8:30 a.m. on Saturday morning. It was a spectacular day – not a cloud in the sky and very little haze.

As the ferry approached Liberty Island, I went up to the top deck to take unobstructed photos. Being morning, the sun was low in the sky providing an excellent directional light on to statue. The ferry does a great job of coming in close to the island at a slow pace, and then circling the front of the island to provide views of the statue from both sides. I stopped taking photos as the ferry got close to the dock, and then realized you could see both the Statue of Liberty and the New York City skyline together – a very nice Kodak moment. 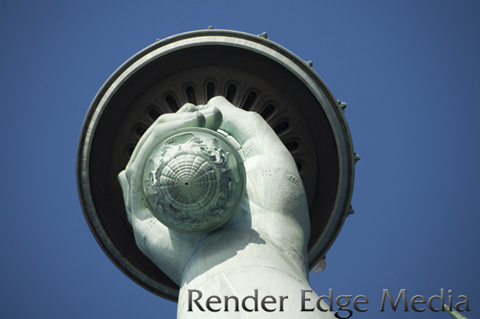 Close up of the hand of the Statue of Liberty.

After departing the ferry, we walked around the front of the statue. It was great fun to zero in on parts of the statue as opposed to whole thing. The picture at the top of this article was my favorite. By only seeing a part of her arm, you get the sense that Miss Liberty is really stretching her arm very hard to hold up the torch as high as possible. When you see more of the arm, it doesn’t give that same impression. A good lesson of what cropping can do.

View From the Pedestal

After taking in the statue from all the vantage points on the island, we entered the pedestal. In there is a very nice museum taking you through the history of the statue, including early sculpted renditions as well as showing the process how the artisans translated the final design into copper sheets. Quite an undertaking because each section had to have a wooden negative mold produced which the artisan then used to shape the copper sheet. After the museum, it was up 154 steps to highest point on the pedestal. We could not go up to the crown because those tickets are reserved on-line and were gone long before we contemplated visiting the Statue of Liberty. This is the closest you can get to the outside of the statue and is where I took the picture from below of the hand holding the torch. I have always marveled at how well this part of the sculpture was executed. Miss Libery’s grip on the torch is firm, but not too tight. I think this impression is formed because her fore finger is not wrapped around the handle but is instead resting on the underside of the torch platform. Go find a picture of her right hand and see for yourself.

Silhouette of the back of the Statue of Liberty.

As we walked around the back of the pedestal I took a picture of the shadow of the statue stretched along the ground. It occured to me that this also presented an opportunity to take a sillouette picture of the statue from behind with the sun placed directly over the torch. So I quickly ran down the stairs and to the back of the island, and snapped off a series of photos with the sun back lighting the statue. The best photo is shown here. The sun flare is completely natural – no Photoshop work involved at all. After I got home, I was curious to see if others had executed this same shot. A quick search on the Internet showed several variations, but the closest one I saw exposed the shot differently so you could see the torch itself with the sun brightly shining through the railing.

The best comment of the day came from a little girl my wife overheard as we were walking around the base of the statue. She said “Mommy! Why is she holding a teapot?” We both looked up and, lo and behold, but doesn’t the flame of the torch look like a tea pot?! Wow, from the mouth’s of babes… I could only imagine how Frederic Barholdi would have reacted upon revealing the statue for all to see for the first time and then some child asking him why the lady was holding a teapot. Ha! 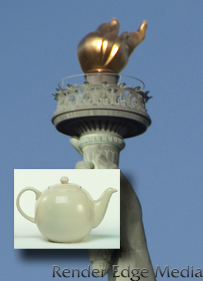 The little girl exclaimed “Mommy! Why is she holding a teapot?