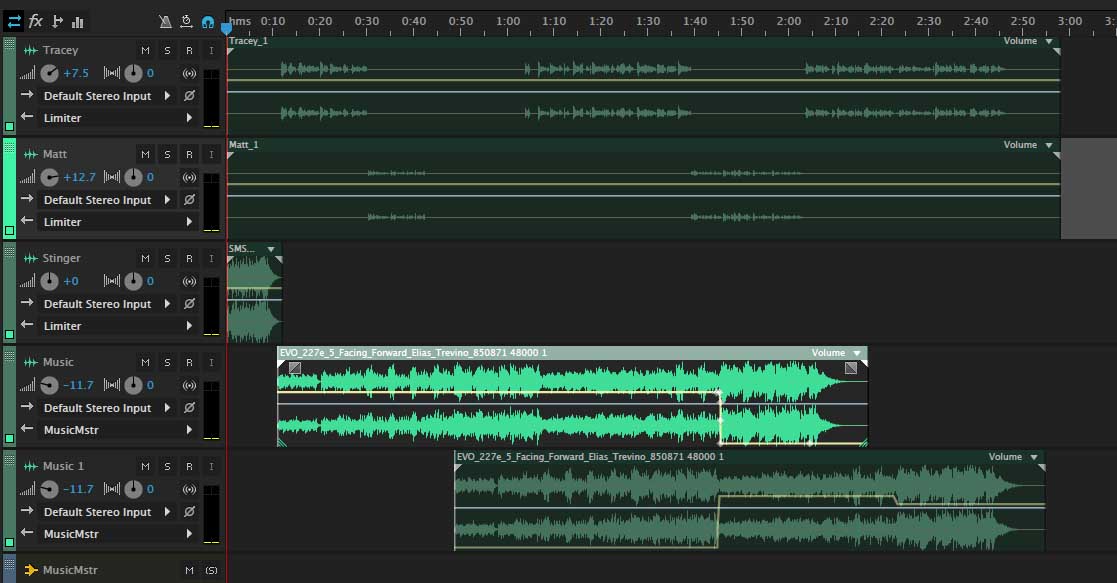 Extending a music track to meet the duration of a video.

It’s something I take for granted now.

It’s very rare that a piece of music will match the length of a video production. Inevitably an edit (or several!) will be required to either extend or reduce the duration of the music so it will fit the video. I’ve done this so many times now that I don’t think much about it – it’s become rote for me – but there are some techniques I’ve honed over the years that make the process straight forward and repeatable.

My philosophy has always been to edit the music to fit the video.

It’s certainly possible to add, subtract, extend or reduce scenes or clips to modify the overall timing of the video to fit the duration of the music, but, from my point of view, this is not the right way to approach the problem. The care put into optimizing the pacing of the visual needs to be honored.

The pacing in a video sequence is created not only by what is happening in a particular clip, but also how the clips transition together to create the scene. Editing often comes down to making decisions on a per-frame basis, so making what may seem like small changes to the video can wind up jarring the audience in an undesirable way, so my approach is to lock down the video when I start adding the music backing track.

The Art of the Music Edit

When the video production is ready for the music backing track and other soundscape elements, I bring the files into Adobe Audition. 30-second TV commercials are straight forward. I typically find music tracks with 30-second versions and I simply drop them in. But for videos with a different duration than the music, I start with two duplicate tracks of the music. This first music track is placed where the music needs to start, and then the second track is placed where the music is meant to stop. Then I work backwards from the end to determine where I can make a seamless cut to the music to transition from the first track to the second.

This is where I take advantage of the traditional sections found in all music, such as the verse, chorus, bridge, hook, and refrain. I listen to the song and determine where the natural transition points occur, and decide either to repeat the section or cut one out completely in an attempt to alter the duration of the piece. Keep in mind this is a music backing track. Even an imperfect edit will most likely go completely unnoticed because the action on the screen and, most notably, either a voice over or dialogue will be what the audience is paying attention to. However, if the edit is a good one, then the new music can easily stand on its own boldly without calling any attention to itself that it has been altered in any way.

I actually used to do this as a kid with cassette tapes. I remember taking Procol Harum’s A Whiter Shade of Pale and making an extended version by cutting just before the very last chorus on the fade out to an earlier part of the song. Funny how something I did for entertainment as a kid has become an integral part of my workflow.

Some Music is Better Than Others

This will be obvious, but some musical pieces are more versatile than others based not only on the structure of the song, but the instrumentation used at different points in the song. The timing of an edit may be perfect, but because one section is “quiet” and the other section is “loud” based on the instruments used, the edit doesn’t work.

For a recent set of videos I produced for Business NH Magazine I got very lucky with the music backing track I found.

Business NH Magazine gives out Business and Business Leader of the Year Awards in ten categories each year. They recognize and give out the awards to the winners at a luncheon. To efficiently acknowledge the contributions of the winners, Business NH Magazine hired Render Edge Media to create a video for each business winner to be played at the luncheon. The videos consisted of interviews with the winner and two or more business leaders familiar with the winning company. I interviewed 32 people over the course of four days generating over 14 hours of raw video. This all was distilled down to videos that were approximately 3.5 minutes long.

I created two distinct set ups for the interviews. Each one was used twice by filming from different angles (left or right), and I used two cameras to capture each interview. This was done to ease the edits between people so I never had a jump cut. The two camera capture is used to seamlessly cut out the inevitable uhm’s and ah’s from the single person interviews. I asked a member from the Business NH Magazine staff to attend all the interviews to make sure I covered all the material and have them ask supplemental questions.

The two set-ups filmed with both left and right angles to avoid anything looking like a jump cut that would jar the audience.

The music backing track I selected for the video was “Facing Forward” composed by Jonathan Elias [ASCAP] and Sarah Trevino [ASCAP]. What was absolutely brilliant about this music was that it repeated the main part of the song very quickly, allowing me a great deal of control to fine tune the duration. This was extremely important because once the comments from the interviewees were locked down, the duration of the video was set and could not be extended or reduced.

Not all musical selections provide this level of control or versatility. Refrains or choruses can sometimes be quite lengthy making it a big challenge to crop the music to fit so it still sounds good.

Below is one of the ten videos produced for Business NH Magazine. I also produced the motion graphic opening and closing sections.