Up Close With the Future President of the United States

Every four years New Hampshire is the focus of the nation as the state holds the first presidential primary election. In 2020, Hearst Television decided to document how the local TV station, WMUR covers the historic event.

For the documentary, Hearst Television hired me as both a cinematographer and director of photography to help capture “creative” shots and film their interviews with the WMUR staff.

Hearst had dedicated teams to follow several WMUR staff members during the three days – on-air talent as well as the behind-the-scenes folks – so I was asked to capture a wide range of shots to be used as transitions and B-Roll.

The first day I captured the candidates arriving and leaving in slow motion with the RED Gemini. The comings and goings were pretty quick. A vehicle would pull up to the entrance, the candidate and their entourage would get out, and then a WMUR representative would whisk them into the building. Very few people were hanging out to see the candidates even though it was an excellent opportunity to see them all.

I used the balance of the day to produce several time lapses around the city of Manchester, NH. I found an interesting juxtaposition for one of them. In the foreground there were Pete Buttigieg signs and in the background there were Trump tents selling Trump paraphernalia. I actually had a Trump supporter ask me to not have the Pete sign in the shot, but once I explained what I was doing, he was okay with it.

I got access to the roof on the WMUR building and ran a time lapse of street and the sky. The roof was a bit dicey to navigate – tons of ice and snow – so I stayed well away from the edge of the building.

Another time lapse I captured was in the control room. They attached a mount high up in the corner of the small room full which was stuffed full of the monitors and sported a large control board used by the director to run a live broadcast. 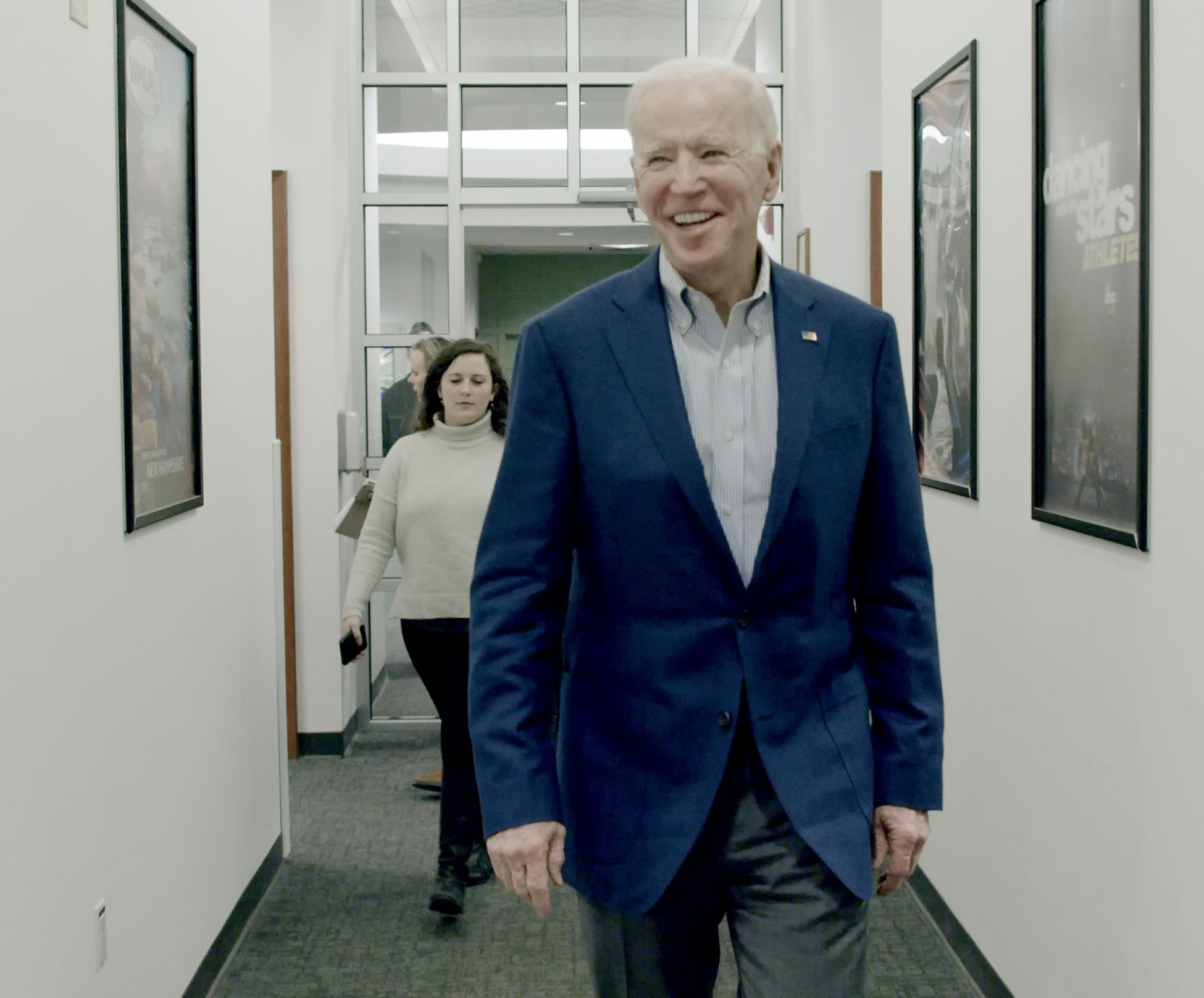 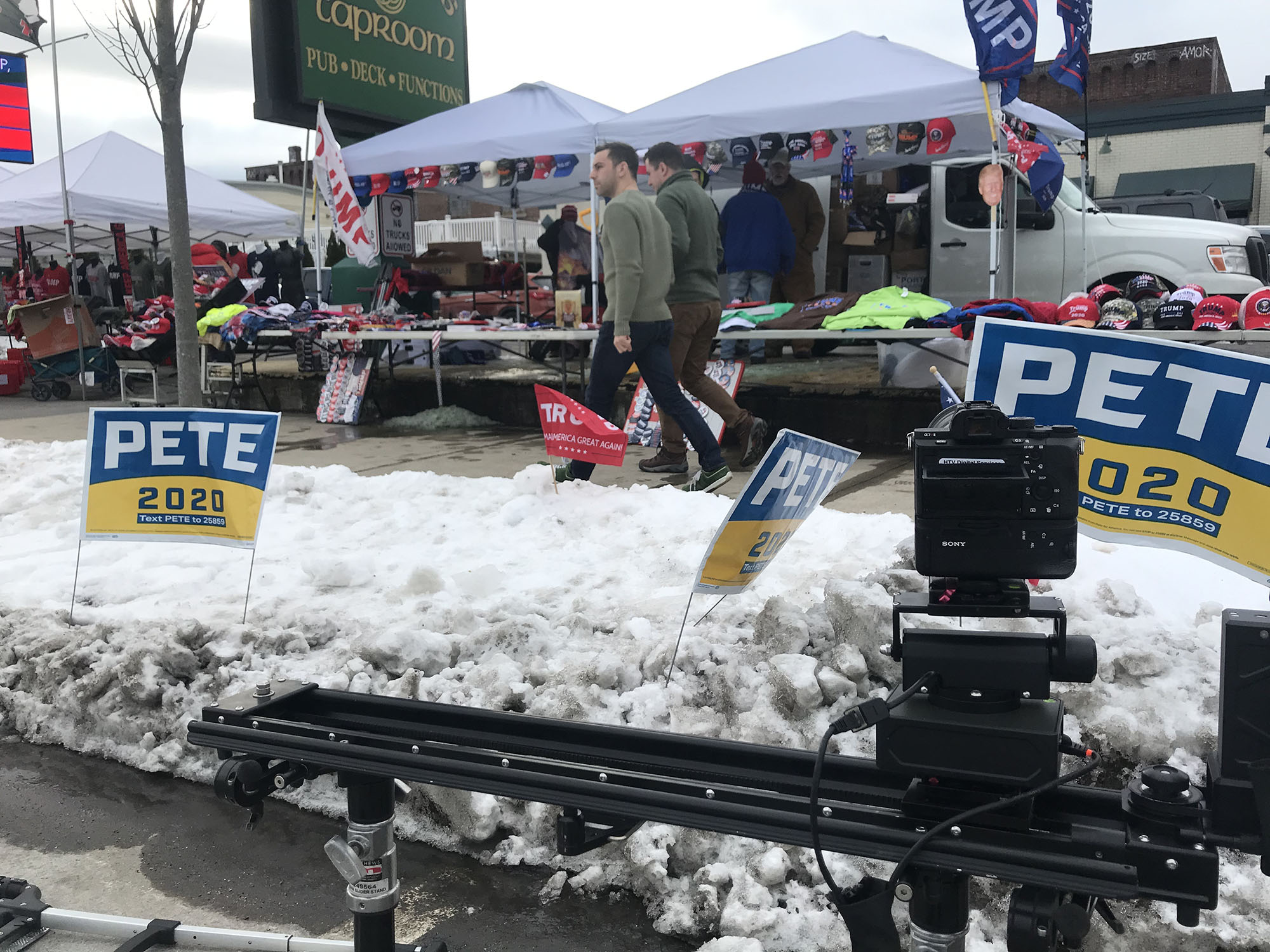 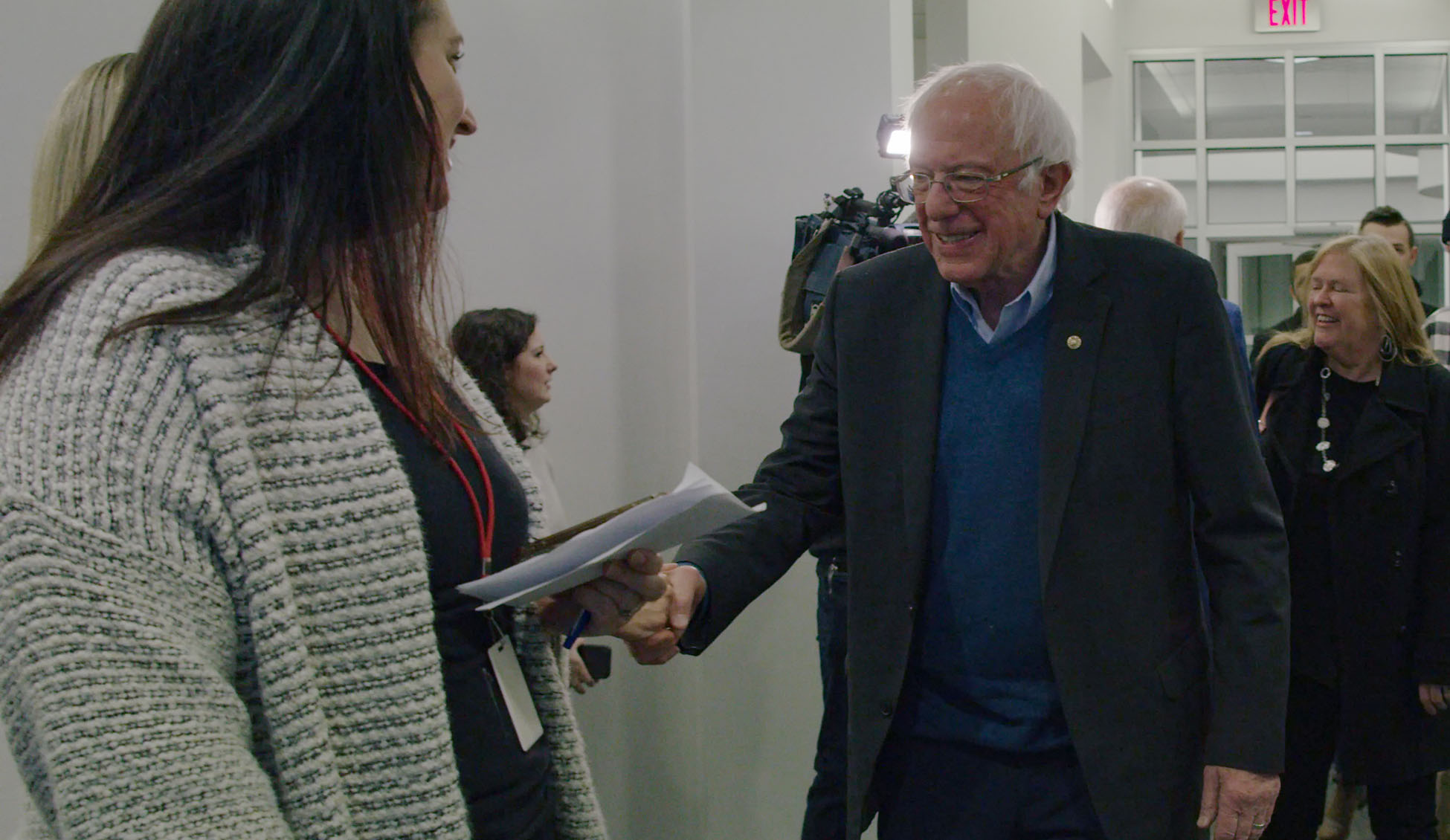 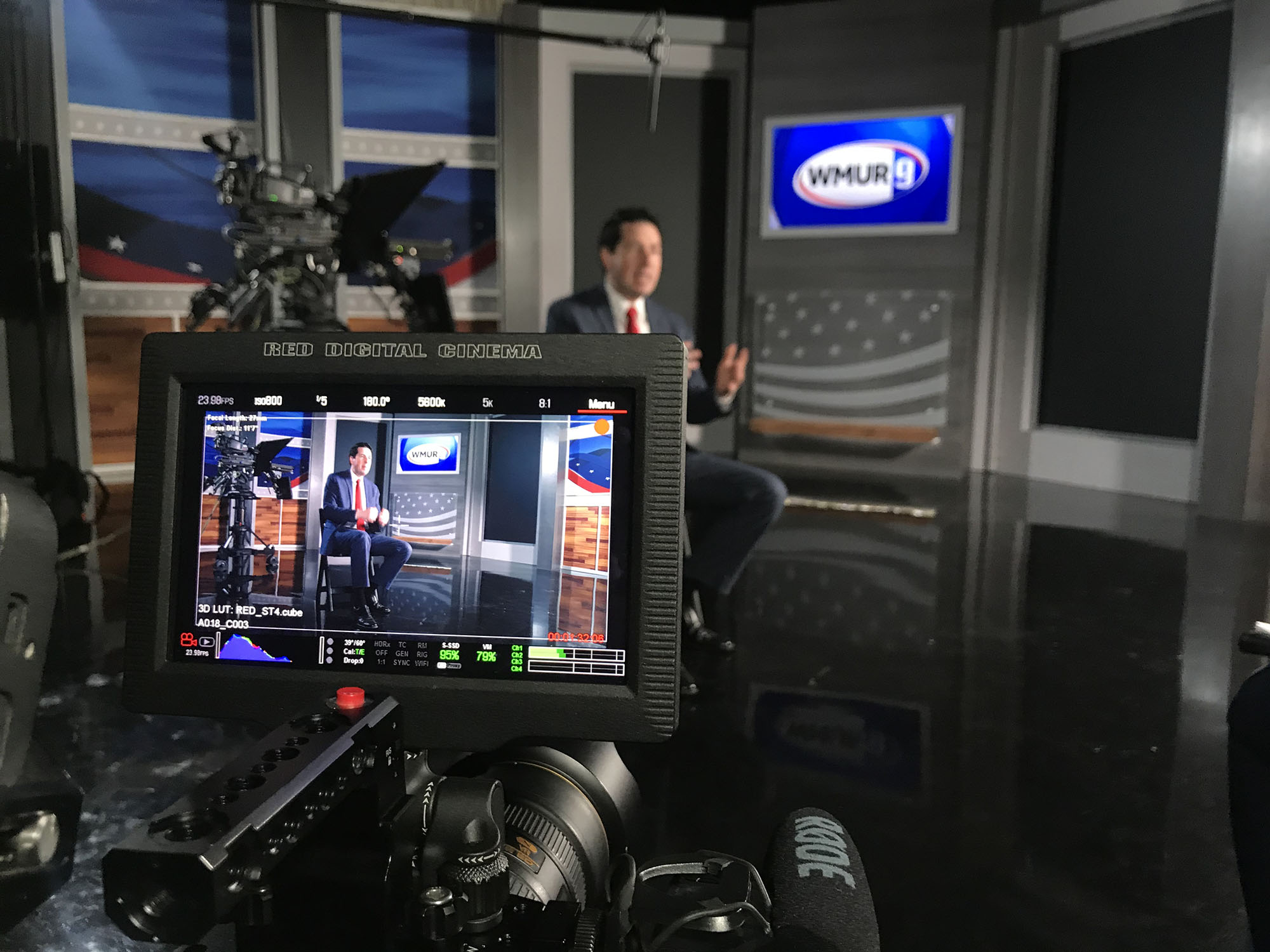 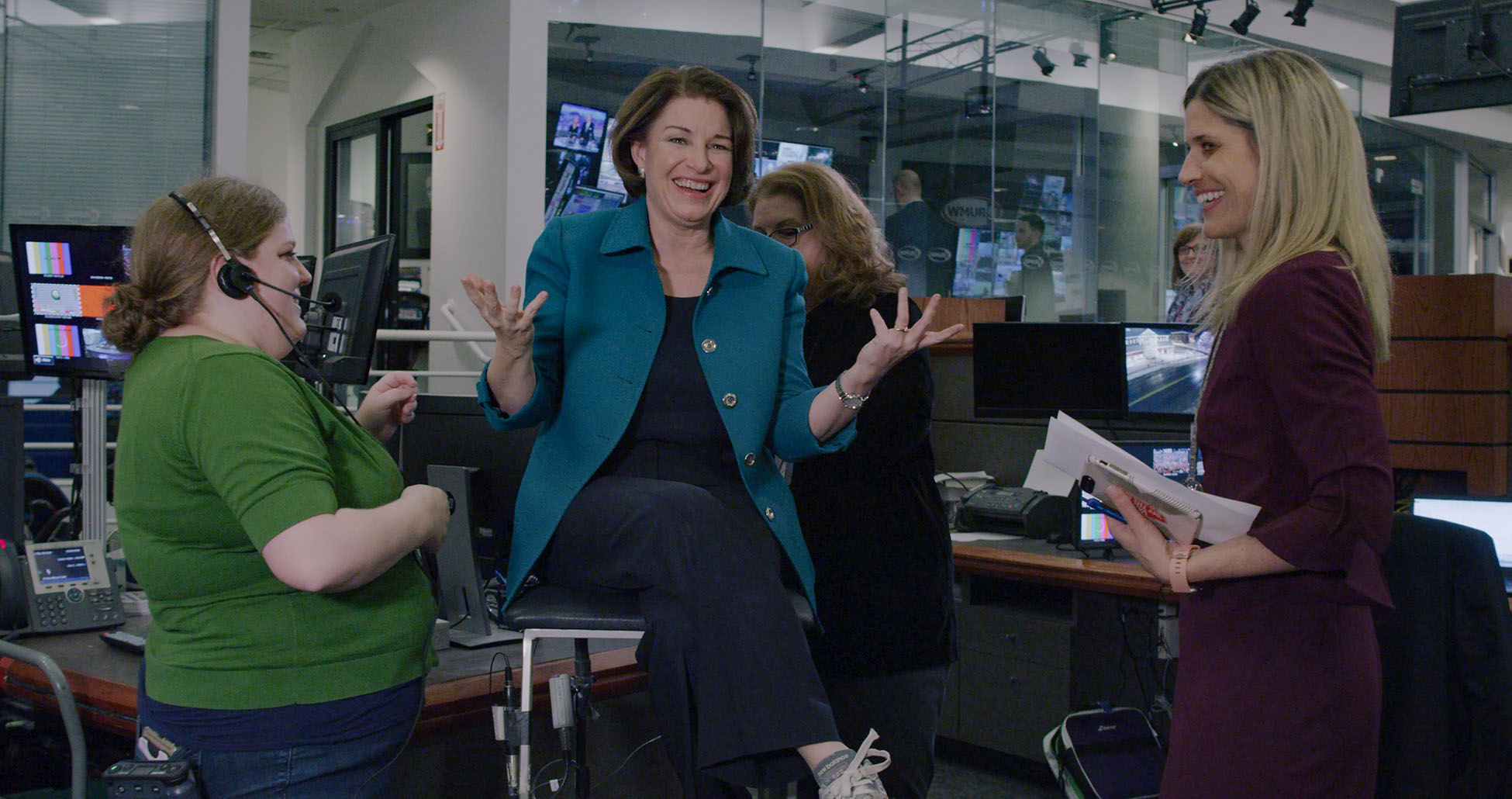 On primary day, I set up a time lapse outside a small New Hampshire town hall as people lined up to vote, and also captured B-Roll of the folks coming to vote.

RED Gemini on the Steadicam and Slider

WMUR again had all the candidates come to the studio to give their last one-minute pitch to the public. For this I put the RED Gemini on a Steadicam so I could follow the candidates as they strode across the newsroom on their way to and from the on-air studios. This footage was also captured in slow motion.

The best moment I caught was when Bernie Sanders was leaving and Joe Biden was arriving. WMUR tries very hard to avoid any proximity between the candidates, so this was certainly unplanned. You can see this at 0:43 in the final video. Although Bernie pats Biden on the back, he never looks Joe in the eye.

I don’t normally get star struck, but when I tried to say “hello” to the Vice President as he came up to me, my words were definitely stuck in the back of my throat. Oh well.

I also captured slide shots with the RED, as well as close ups of whatever was happening in the newsroom.

DP for the Interviews

Hearst asked me back the next month to help them capture interviews with the WMUR staff. WMUR very nicely provided us with one of their studios for the day to film the interview in. We just had to creatively rearrange things so each interview looked different. We used the RED Gemini for the wide shot on a slider with the Kessler Crane Second Shooter to automatically move the camera back and forth with a parallax shot.

I was very excited with the final product. Almost everything I shot was used in the documentary. I typically edit my footage, so it was treat to be surprised to see how the Hearst team decided to employ my shots within the scope and flow of the video.