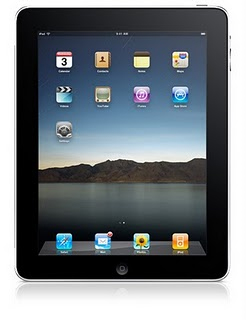 I stopped by the Apple store yesterday to check out the new Apple iPad. The store was reasonably busy, but not anymore traffic than I’ve seen normally (who knows what it was like during opening weekend!). They had a table set up with eight (8) iPads to play with, and not all of them were being used.

After all the hype and hearing the initial impressions, I expected to love it — but I didn’t.

The iPad is VERY responsive. No hesitation when you select an icon, swipe your hand across, or even tilt the device every which way. This is an improvement over the iPod Touch, especially in the area when you re-orient the device. I find the iPod Touch delays too long when you tilt it from landscape to protrait mode, but the iPad was instant and dealt with going upside down as well – a really effective, natural feature when you give it to someone to else.

I thought the book reader application was very nice. The pages flip with ease. You can instantly change the size and type of font. And I thought is was very easy to read.

I was able to successfully play HD YouTube videos. The only disappointment being that 16×9 videos are letterboxed (those black stripes running across the top and bottom of the video). This is because the aspect ratio of the iPad display is not 16×9. I don’t know why this negatively effected me, but I was not happy about it.

The photo gallery applications were very nice. Given what Apple has done in this arena this was expected, but they did an excellent good job here. You can even turn the device into a picture frame viewer.

I was perplexed on the best way to type on the device. In landscape mode, the virtual keyboard is easy to line up your hands, but you have to lay the device down on something to type. This was less effective in portrait mode (due to the smaller width allocated for the virtual keyboard), so I found myself holding the device with my left hand and poking the keys with my right. Not very quick, but effective. I then tried holding the iPad phone-style with both hands and typing with my two thumbs. This actually worked well, but I found myself NOT gravitating to using it this way because for the most part you are browsing info which means using one hand primarily to hold the device while the other does the navigation. It takes too long to switch the position of the hands. Perhaps over time this would become natural.

Even though the device is very thin, somehow I wanted it be thinnner. Is that crazy? It’s heft was more than I expected. My hand/arm became fatigued only after five minutes of usage. I know that time will extend as one uses the device more and more, but I wasn’t happy about that part of the experience, probably because it was unexpected. I’m sure future versions will be lighter — just look at the history of it iPod.

It’s really hard to get good advice on which memory configuration would be best to buy. We all know more storage is better, but it does come at a premium, so it pays to understand how much you really need. The Apple representatives were not able to help make this decision. For instance, it would be nice to know how much storage is required to store an HD movie on the device. This is key because if I were to use it as a sales device, I would need to be able to store my portfolio on it and I would like to know the limits.

The iPad I did not generate any real excitement within me. I did not have a moment when I said “I have to have this!” like when I saw the first Macintosh in 1984.

I’m planning on looking at the iPad again, this time going deeper into the applications and try and do some serious browsing with the device (to get more typing in). If I buy one, I would certainly get the 3G version so it can always be connected to the internet. Stay tuned.