Earlier this summer I attended Alex Buono’s The Art of Visual Storytelling Tour. Alex is the Oscar nominee and Director of Photography (or DP) for Saturday Night Live’s film unit. During the seminar, Alex broke down one of the special effects he shot in the film “Green Street Hooligans,” starring Elijah Wood, where Alex was both the cinematographer and co-producer. The scene was in a soccer stadium and they needed to fill the stands with a sold out crowd. Since it is prohibitively expensive to hire that many extras, instead, they used special effects to create the crowd from a small number of people.

I was faced with a similar challenge when filming a TV commercial for O’Neil Cinema. The script called out for a shot of their signature theater and I wanted it filled to capacity for maximum impact. However, we only had about 15 extras. So I implemented the same technique Alex revealed at the seminar to pull off the shot.

I locked down the camera in the front of the auditorium, then I positioned the extras in two rows of seats at a time. Behind the second row, we put up a green screen. The green screen would make it easier to separate the audience members from the next row in post production. I then directed the extras to first smile, then clap, then counted them down to react to a scary moment. I had them do all three reactions because I wasn’t sure which one would look best in the commercial. We marked the last seat occupied for the current shot with a piece of tape, then moved the extras down the row to fill the next set of seats. We repeated this process a total of 20 times to fill every seat in the theater.

In After Effects, the footage for each of the twenty positions was trimmed to extract the audience clapping. I then used the Keylight effect to remove everything behind the second row of extras, and the mask tool was used to create a mask of the seats in the row in front of the extras. When these scenes are all overlayed, the twenty clips in combination give the appearance that the theater is full. Of course, if you look closely, you will see twenty copies of every person used in the shot, however, since the scene is on screen for all of 2.2 seconds and since most of the heads are very small, it’s almost impossible to notice any of the duplication.

As special effects go, this one was quite straight forward to produce. It took about 40 minutes to film the extras in all the positions in the theater, and roughly 4 hours to complete the work in After Effects.

Many thanks to Alex Buono for his inspiration and great seminar. Without it, I don’t think I would have been able to pull this shot off for the client. 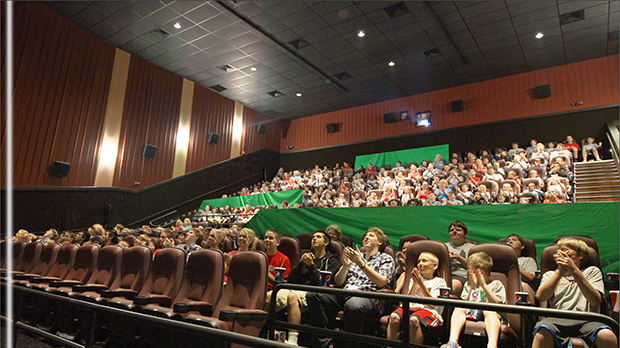