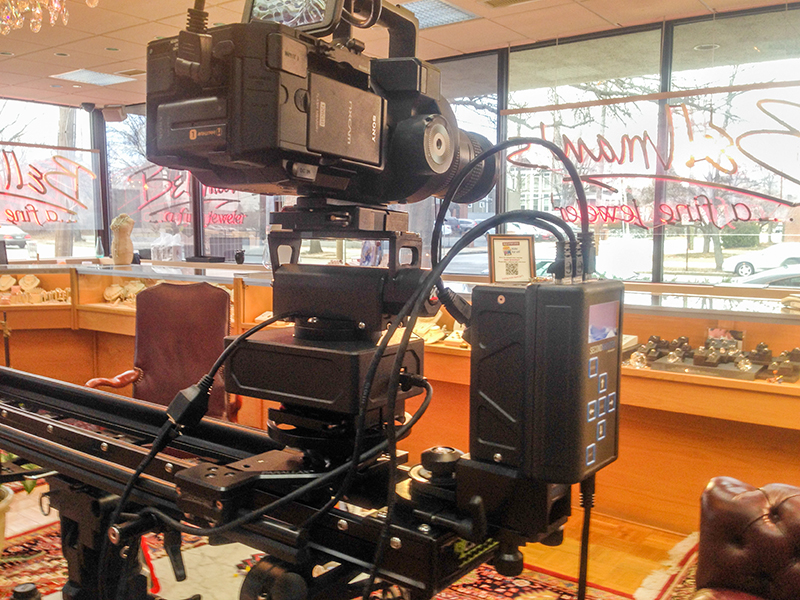 The Kessler Crane Second Shooter and CineSlider at the Bellman’s Jewelers video shoot.

A slider is a wonderful piece of equipment that adds significant production value to a video project. I’ve been using them for years, but the one frustration I’ve had with them is that, for me, the shot is limited by how well I can push or pull (that is, slide) the camera manually along the slider. For slow movements, it can be quite challenging to maintain the same pace throughout the shot. I’ve gotten quite critical of my work and am always determined to get a smoother shot. A great way to do this is to use a motorized system on the slider. A motorized system allows you to program where you want the slider to start and finish, and how long you want the shot to take, then you sit back and let the motor do the work for you.

However, motorized slider solutions have traditionally been fairly expensive until Kessler Crane recently introduced a product called Second Shooter. I decided to take the plunge and purchase the Second Shooter after experiencing a few more video shoots where I thought the motor would have been an ideal assistant to getting a better shot. I purchased an upgraded system to not only motorize the slide, but also control the pan and tilt of the camera. I was most interested in the system for my videography, but it’s also an ideal solution to take time lapses – see the opening to any House of Cards episode for many examples of a time lapse with camera movement. They provide greater interest than simply the speeding up of the action.

While producing a commercial for Bellman’s Jewelers (located in Manchester, NH) to advertise their buying event for April 2015, I used the motorized slide for almost every shot. As desired, the motor kept the sliding speed constant throughout the shot, but what I wasn’t prepared for was timing the movement with the words in the script.

In manual mode, you would simply push the slider to the desired starting point, then queue the talent with “Action!.” With the motorized slide, you have to wait until the slide returns to the starting position. Couple this with using a teleprompter and it becomes quite the task to get everything just right.

The full use of all three motors came in to play with the shot at the 0:11 second mark of the commercial – the fourth shot with the microscope. This used pan and tilt as well as the slider motor. It was fabulous to set the shot up, and then have it repeat perfectly for every take. I just needed to make sure the action on the screen matched the programmed movement.

The downside of the motorized system is the noise level. It’s low enough that a lapel microphone on the talent could be balanced to almost eliminate the sound, but I believe including a music bed helps cover any residual motor noise. If the scene did not include a music backing track, I think the motors would be heard.

The Bellman’s logo from the window sign is photographed in the correct (non-mirrored) orientation in this shot because we’re seeing its reflection in the jewelry case.

The ending shot was a happy accident. I was scoping out how to shoot one of the jewelry cases when I noticed I was able to see a mirror image of the Bellman’s sign hanging in the window. This was significant because since the sign is meant to be viewed from the street, it is reversed when looking at it from inside the store. So, since I was seeing its reflection in the jewelry case, the logo was now viewed as normal. Pretty cool!

Overall I am quite happy with the Second Shooter. I am looking forward to future video shoots with it, including some sophisticated time lapses.