Fishing With The Bears at Brooks River, Alaska in Katmai National Park and Preserve 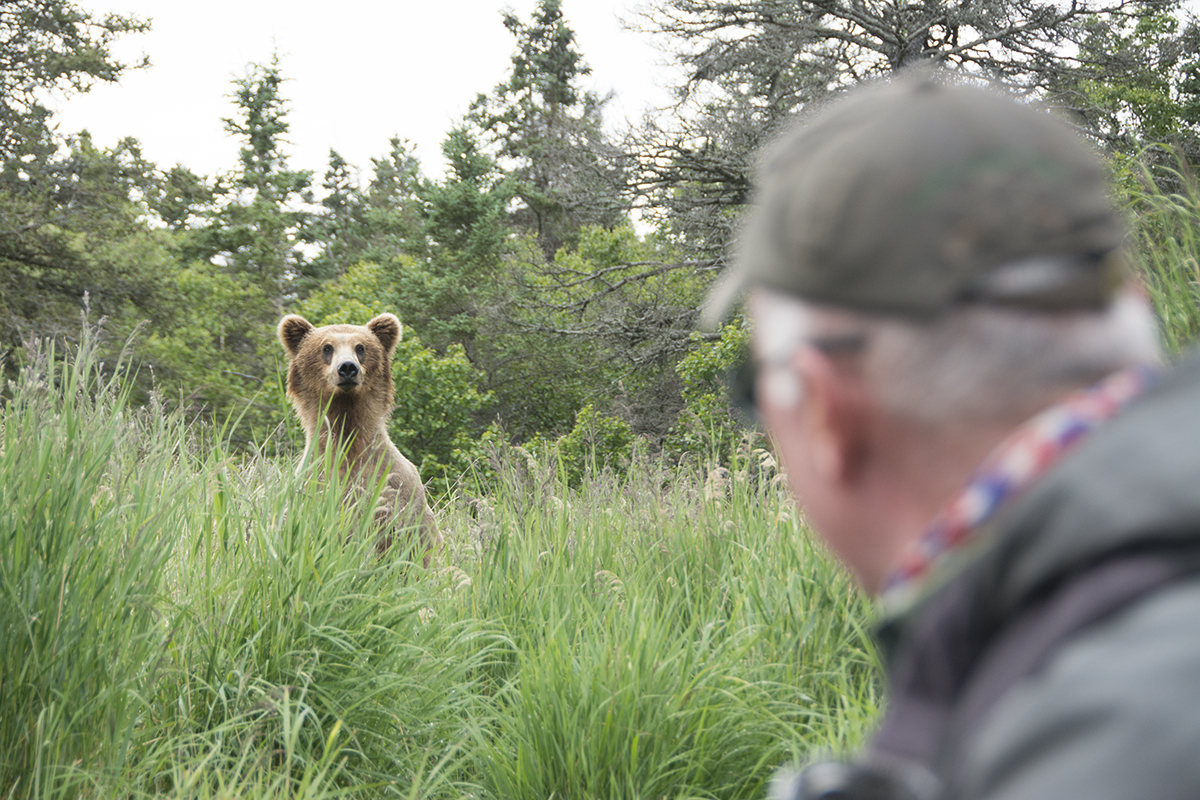 Close encounter with a bear in the Brooks River in Katmai National Park and Preserve, Alaska.

While on a fishing trip with my Dad near King Salmon, Alaska with Alaska Rainbow Lodge, we spent one day at Books River located in Katmai National Park and Preserve. Katmai is one of the premier brown bear viewing areas in the world due to incredible numbers of Sockeye Salmon that run up river each year to spawn, and get “caught” at the falls. The bears have figured out that with a little patience, it’s easy to nab the fish as they jump in the air to navigate the falls. Because of this unique arrangement, Katmai is one of the most popular places to observe a large number of brown bears in their natural habitat. This is also one of best places to fish for salmon, as well as trout. Coupled with the bears, Alaska Rainbow Lodge has this river as one of its great destinations to fish during the week.

We arrived early in the morning before the onslaught of tourists that fly in for the day to observe the bears, so we headed for the viewing platform near the falls first. Only 40 people are allowed on the platform at a time for 45 minutes – you can get back in line to view as many times as you like though after your 45 minutes are up. On the platform, you are instantly greeted by the picturesque water falls with several bears looking for salmon. From my experience, photographing wild life is very challenging. You need tremendous patience and luck. And once you have a subject available to photograph, then you must overcome a host of potential hazards, such as auto focus and backlighting. So when I arrived on the platform, I had to hold back my instinct to just shoot like mad. 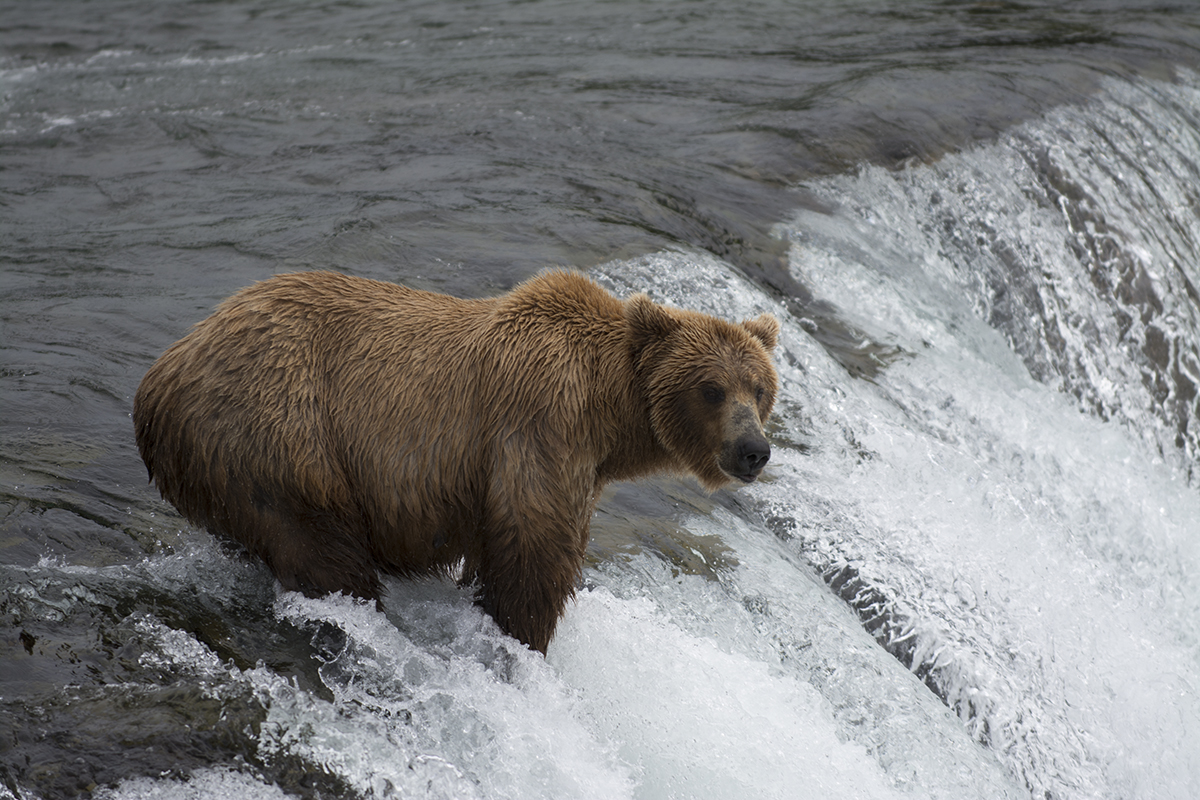 With the white water around the falls, I quickly realized the camera needed some exposure compensation. Even with the bears walking literally within a few feet of the platform, I took an exposure series to find the right settings. I wound up increasing the exposure by 1.7 stops when I was shooting into the white water. Then, of course, I had to undo the exposure adjustment when I wanted to focus on bears in a different part of the river. A little harrowing since your instinct is to shoot immediately when you see the subject in just the right position. I did do this, then I realized the exposure was off (thankfully), reset the camera, then carried on.

Upon arrival there were five bears hanging out in and around the falls themselves, but we were quickly visited by another four bears walking past the platform and up on to the top of the falls to fish. Slightly down river were another couple of bears – these bears were kept out of the “prime” fishing spots near the falls. 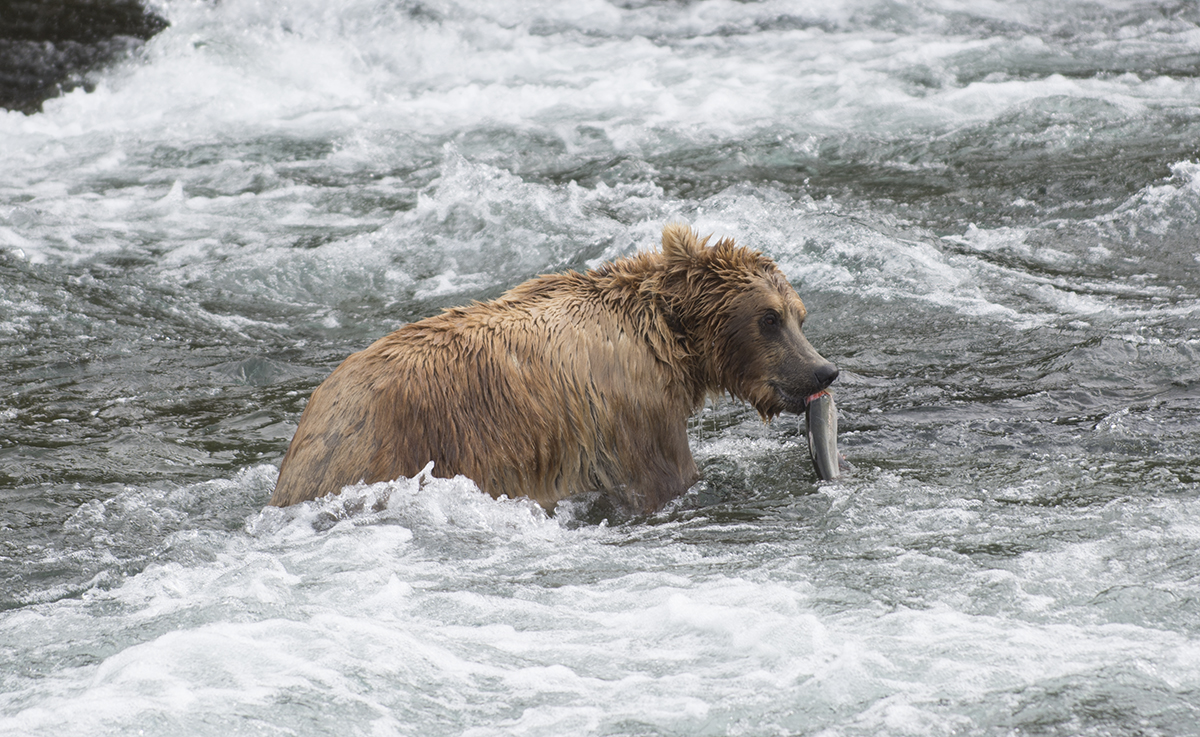 Brown bear with a recent catch of Sockeye Salmon at Books Falls in Katmai National Park and Preserve, Alaska.

I’m sure most people were looking for that “Kodak Moment” shot with the salmon being snagged out of the air by the bears lingering at the top of the falls, but the whole time I was on the platform, I only saw one fish actually jump. Perhaps earlier in the season there are more jumps per hour, but from my observation, I thought getting that classic shot would be next to impossible. However, I did see a bear catch a fish just below the falls directly out of the water. I started shooting quickly (I didn’t have my continuous shutter turned on – perhaps I should have) and caught the bear with the salmon hanging out its mouth. The bear immediately took the fish to the far bank and ate it.

After I was done on the platform, we then entered the river just below the falls to fish. This was absolutely amazing. We were literally a few hundred yards from a ton of very large brown bears. Our guide, Nigel, was very good at educating us on what we had to do to be safe, and we both felt confident while fishing, or, for me, taking pictures. The biggest concern was after landing a fish, you needed to be very aware of where the bears were. Some of them have learned that when the rods are reeling in that there’s a fish at the end. If there’s ever a question, you need to cut the line and let the fish go. 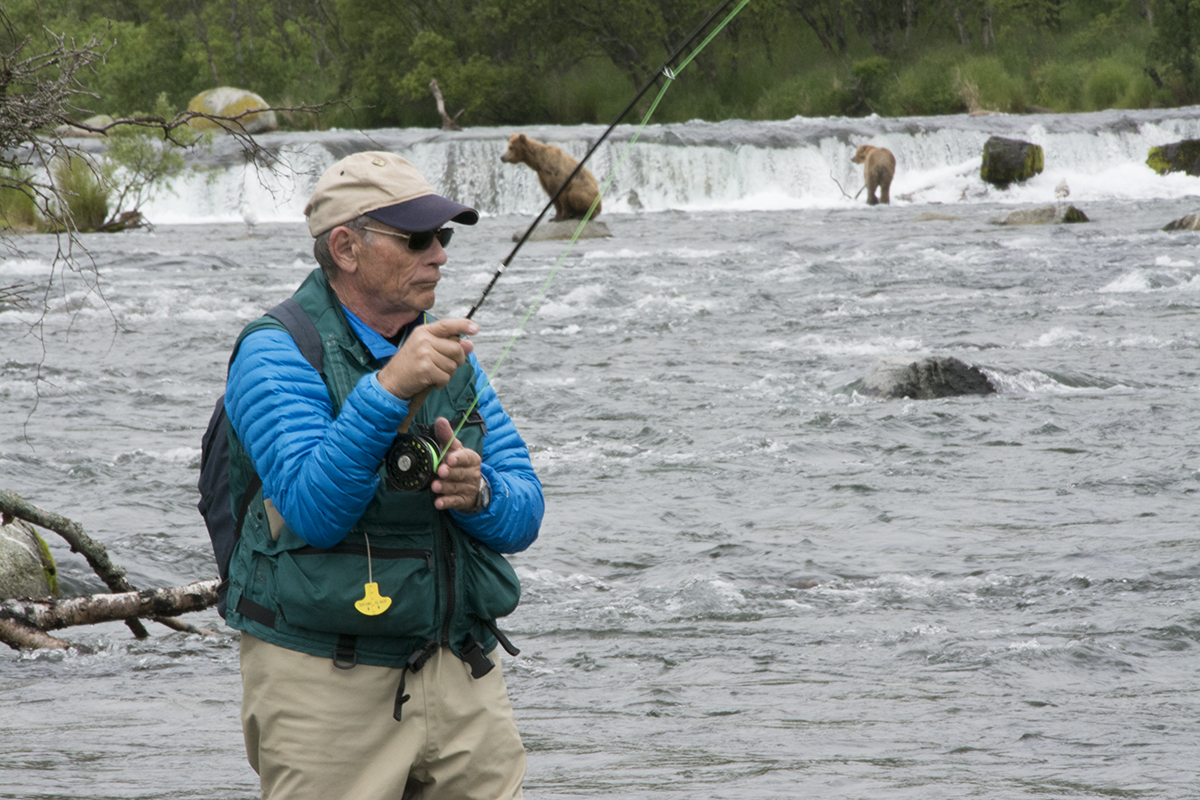 My Dad fishing amongst the brown bears at Brooks Falls.

Soon after we started fishing, we did have a bear cross very close behind us on his way down river, but it turns out that was nothing. The real fun began after my Dad landed a salmon. The bear was 100+ yards down river and was watching the water very intently. It paid absolutely no attention to my Dad pulling in the fish. The guide was watching both my Dad and the bear very carefully. Once the fish was pulled into the shallows, the guide pulled it up for a quick photo but hid it from the downstream bear. He then quickly unhooked it and let it go. My Dad went back upstream to continue fishing. Then the bear caught the sent of the fish on the guide’s sleeve.

The bear started making his way back upstream lifting his nose left and right to catch the sent. The bear eventually popped out the tall grass downstream from us – about the 20 feet away. The guide was very cool. He waited, then gave a quick grunt when the bear made another move towards us. That did the trick because the bear immediately turned and scampered away.

During this encounter, I was snapping off pictures. The best is the one below. I was using my Nikon 18-200mm f/3.5-5.6. The bear was so close I was only at 150mm on the zoom. You can see the bear wasn’t interested in us. He was snooping around for fish. He had no outwardly signs of aggression. 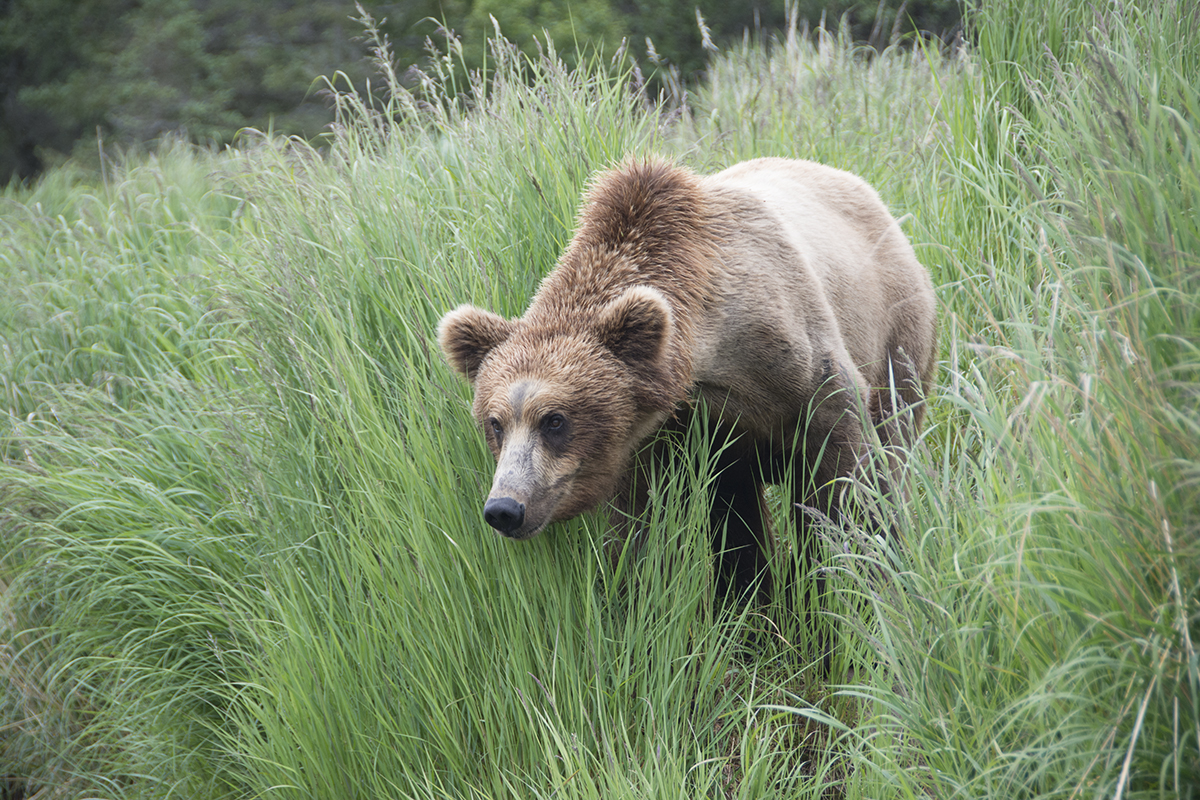 Brown bear along the Brooks River in Katmai National Park and Preserve, Alaska.

Little did we know that the bear wasn’t through. Since the bear previously walked by us just behind the tall grass, I kept watch to see if I could get a glimpse of him as he passed by. Well, instead of walking passed us, he decided to peak his nose above the grass. From prior experience I knew this was a tough shot. The auto focus can easily be fooled and focus on the blades of grass in the foreground instead. I missed a shot in Glacier National Park of a black bear for just this reason. So I made sure I had the bear in focus, re-composed, and then snapped off a few shots. 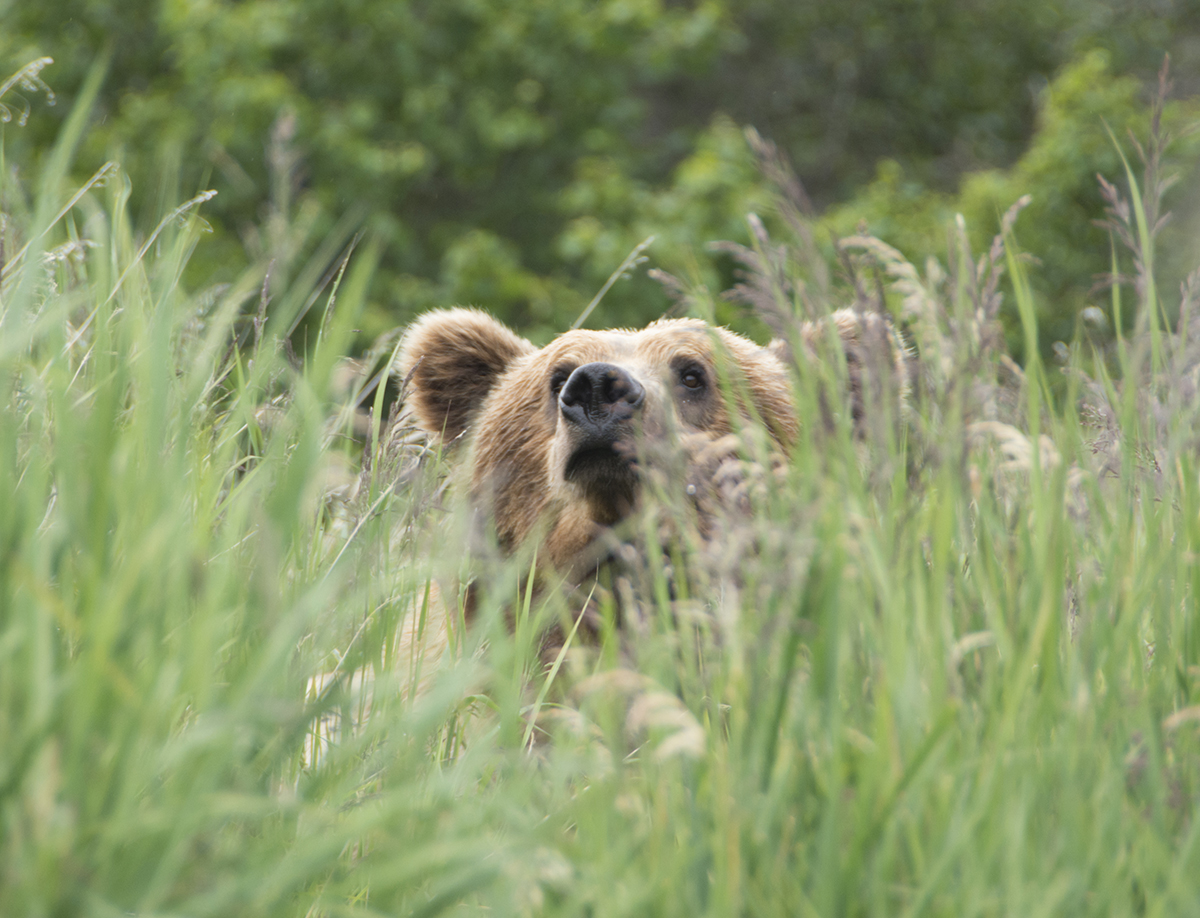 Brown bear peaking above the grass to check us out on the Brooks River in Katmai National Park and Preserve, Alaska

Then the bear surprised us by standing up. I knew the only way this photo would make an impact was if I had someone in the foreground to show how close we were. So I opened up the zoom and took two more shots. The best one is at the top this page. The guide waited and gave another quick grunt. The bear was off heading back upstream. I must admit my adrenaline was pumping. My Dad made his way back to us and remarked that he thought the whole encounter as “cool” and “well worth the trip.”

Throughout the remainder of the day, we had bears walk around us, swim around us and fish around us. We were quite amazed at one bear being able to chase a salmon out of the water and up onto the bank to eat it – quite a trick! After lunch on our way back to the river, the guide made a left, then quickly made a right. We walked right up behind a bear sitting on the edge of the river looking for fish. He didn’t care that we were there at all.

I’m sure the other people who came to Katmai that day to observe the bears from the platform had a wondrous, magical time. But my Dad and I agreed that what made the visit truly special was fishing in and around the bears during the day. It’s a memory my Dad and I will share forever. 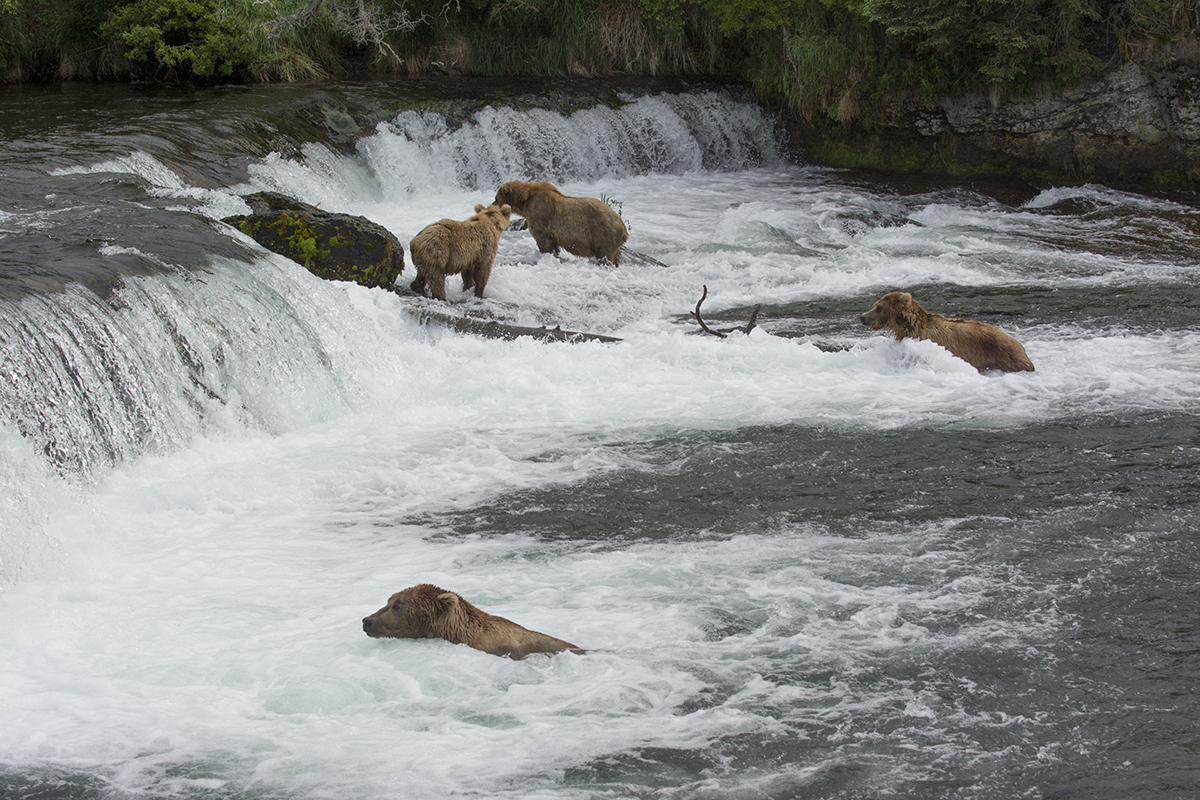