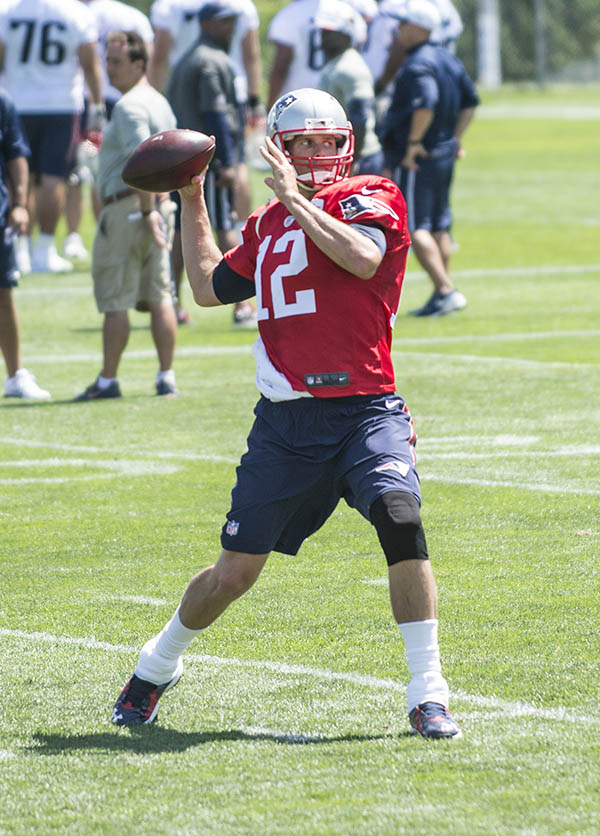 My annual trek to the New England Patriots’ training camp was another spectacular day. 80 degrees and beautiful sunshine.

Of course, that’s by design.

I always look ahead at the weather and pick the day that will have these conditions. The main reason is to make sure I have lots of light so I can shoot at a very high shutter speed to stop the action. Nothing wrecks a shot more than being blurry – either by being out of focus or by movement. And following a football play from the stands means moving the camera very quickly to pick up a receiver about the make a catch, so both the camera and subjects are moving very quickly.

I always find it fascinating to watch the training session. Although only a small window, it’s great to get a glimpse behind how the team approaches the basics. One thing you notice right off the bat is how everyone knows exactly what to do at each session. The horn blows off and players trot to their next location, line up, and start practicing. No explanation from the coaches on what they are about to do – they just go. It’s really the only way to cover the amount of material in such a short amount of time. It’s clear this routine has already been drilled into them from previous sessions before the public ever gets to see them. It’s also fun to see them practice the unusual plays – like punter Ryan Allen, who is the holder for field goals and point-after-touchdown (PAT) attempts, roll out after taking the snap while holding for a PAT and throw a pass and run. Something to look out for during the season!

Of all the years I’ve been attending the training camp sessions, this one was by far the most crowded. There were more people waiting in line to get in way earlier than I’ve seen before (an hour before the session started), and the stands and fields were jammed packed. I think it’s great that the Patriots don’t charge for parking nor for entry. They use the venue to sell food, drinks, yearbooks, and clothing, and they open up their Fan Zone for the kids to have fun, but that’s it. I hope they continue to keep it this way. It’s so nice to see all the young kids having fun and being so close to the players. And, of course, for them to get the opportunity few autographs at the end of the session. 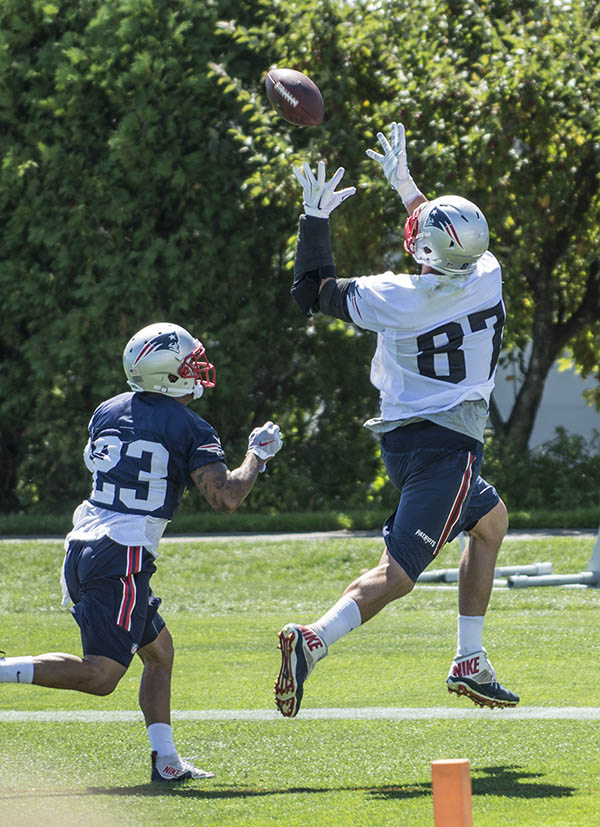 The crowd always keeps a sharp eye on which players enter the field from the stadium, and a big roar swelled up upon Tom Brady’s arrival. The standing ovation lasted for about 5 minutes and Tom actually waved to the crowd in appreciation. In all the years, I’ve never seen Tom acknowledge the crowd like that. He is typically “all business” and completely into the training session. What was more amazing is that the crowd cheered for Tom two more times later in the practice, and each time Tom smiled and waved to the crowd. I don’t know if all professional players appreciate this, but this small gesture to acknowledge the crowd makes people so happy. It makes them feel a connection – that they have in some way communicated in a positive way to the player. And that means they can walk away with a smile – “Did you see Tom wave back to us?” 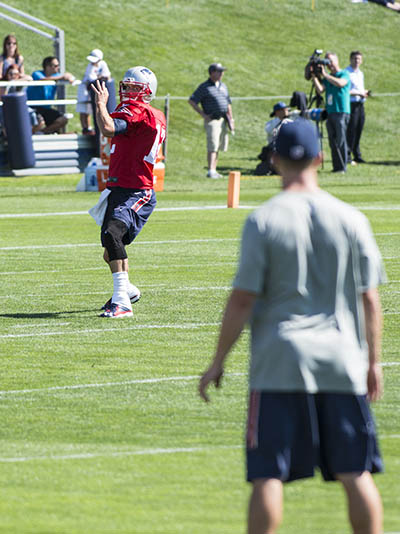 Contrary to what you might think based on suspension laid down by the NFL, Tom took all the reps with the first team. In past years, the reps had to be divided among three quarterbacks. At this session, there was only Brady and Jimmy Garoppolo – Matt Flynn was not dressed – so Jimmy actually got a lot of work in game situations.

Receiver-wise, I thought Julian Edelman looked outstanding making acrobatic catches all over the field. He looked very comfortable and confident. Rob Gronkowski also looked great finding the ball coming his way multiple times in end zone situations. Last year Rob was limited to what he could do in training camp since he was coming back from his leg injury, but this year he was doing everything.

Drop and Give Me Twenty

One fun thing was saw was after one of the passing drills between the offense led by Garoppolo and the defense the offense dropped down and did 10 push ups. The crowd cheered. I wasn’t paying attention close enough to know how they kept “score” to decide on the punishment, but it was fun to see nonetheless. 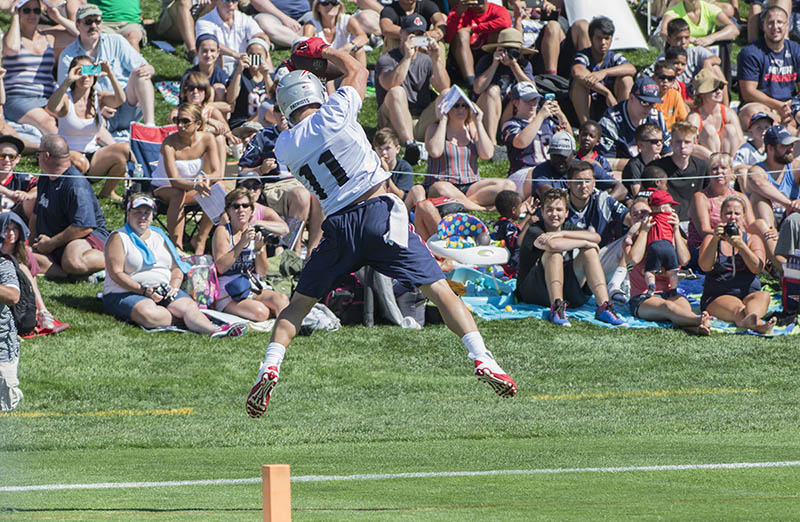 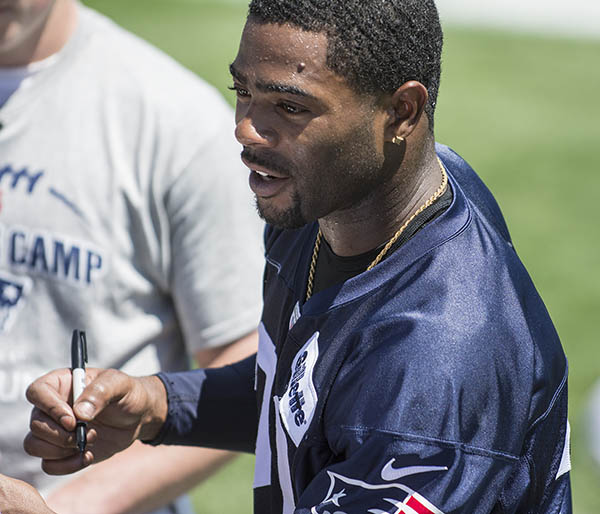 Only six weeks to opening day. Lot’s of summer still to enjoy, but I do look forward to another annual ritual of picking apples just before the first game of the NFL season. Nothing beats the cool, crisp air of Fall, the smell of freshly made cider donuts, and watching football. 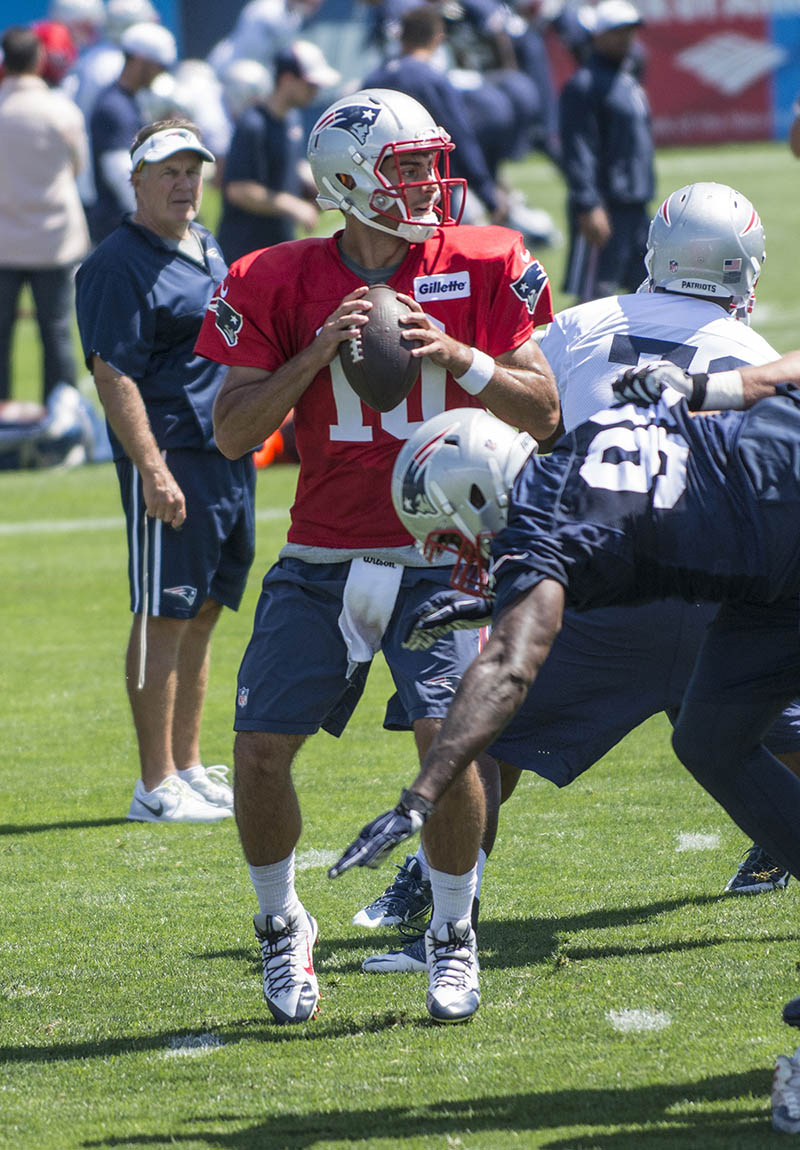 Jimmy Garoppolo under the watchful eye of Bill Belichick at Patriots training camp 2015. 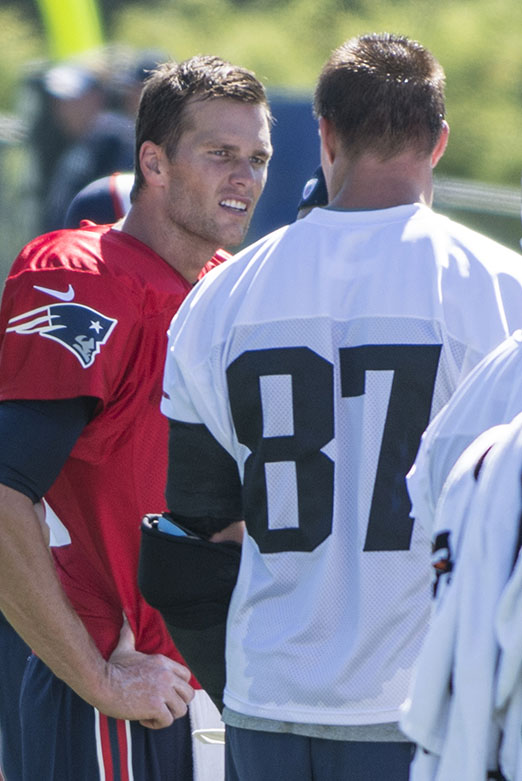 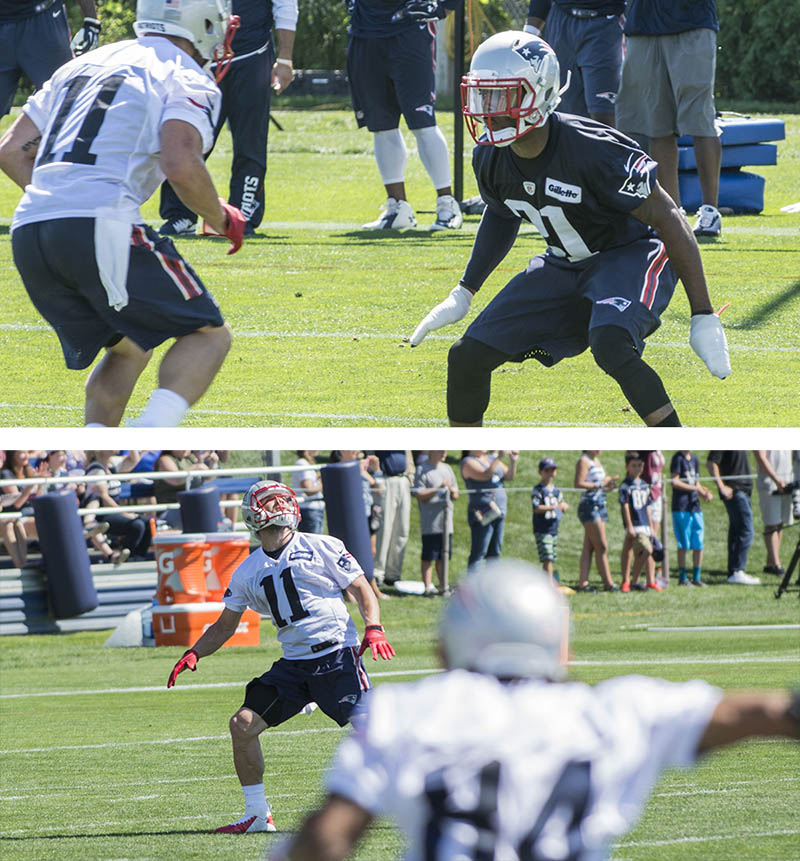