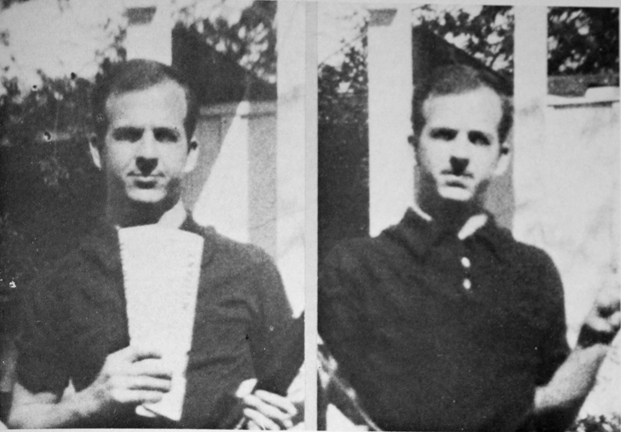 I’ve always been fascinated with the myriad of discussions surrounding the Kennedy Assassination. But in May of 1979, I never imagined how close I would come to some of the most famous photographs in history.

I was finishing my freshman year at the Rochester Institute of Technology (RIT) in the Photographic Science and Instrumentation program, when many of us decided to attend the SPSE annual conference being held in Boston, MA that year. I was completely caught by surprise when one of the papers that was being presented was co-written by our department chairman, Dr. Ronald Francis, had to do with the Kennedy Assassination. In 1978 the government re-opened the investigation and they tapped into the photographic experts at RIT to analyze the Lee Harvey Oswald backyard photos. When shown the photos, famously Oswald claimed his head had been superimposed onto another man’s body. This, of course, has helped fuel many of the conspiracy theories over the years. So the charge to the RIT professors was to ascertain the likelihood that the photos were faked.

The analysis was quite straight forward and very convincing. I found it quite easy to conclude that the Oswald photos were real. Over the years as conversations with friends turned to the subject of the assassination, I would often cite the procedures the RIT professors used to “prove” that the Oswald photos were genuine spurring me to want to see the presentation again to bone up on the finer points of the analysis. The presentation was published in the February 1980 issue of the Journal of Applied Photographic Engineering, but, surprisingly, I could not locate a copy of the article on line. But now I have found something better.

I had forgotten that I had an original copy of the Journal containing the article. I recently discovered it in the attic among a bunch of other collectables, and thought it would be an important piece to make available to the public. So, I scanned the article and have put it into a PDF for download here.

When I did a recent search on the Internet for the paper I came up with a professor at Dartmouth who also did an analysis of one the photos, and agrees with the position that the Oswald photographs are genuine. He uses 3D modeling techniques to demonstrate that the shadows across Oswald’s head are perfect – something that would have been very difficult to fake back in 1963 because the shadows are unintuitive. I personally prefer the scientific approach of the RIT professors – looking at the grain of the film, using the original Oswald camera, and re-creating the shadows with their own photographs – to discredit the claims of fakery.

Ever Been to Deley Plaza?

In 1994 I had the chance to visit Dealey Plaza and walk the grounds myself. It is quite an odd sensation to be in a place that you’ve seen in hundreds of photos from all points of view. It is at once familiar and yet also very novel. I loved standing in the same position as Zapruder did when he took what is likely the most famous footage of the 20th century. What struck me the most, however, was how the theories that sounded great on paper completely melted away when you were there in person and applied simple reasoning.

For instance, standing behind the fence on the grassy knoll where a shooter would have been to shoot from in front of the President is completely absurd. First of all, the assassin would be completely in the open. There is no cover. Nothing to hide either himself or a rifle. Do you know what’s behind the fence? A huge open parking lot then a bunch of train tracks. Who would plan the assassination of a President and be totally in the open? All it would take is one person to notice the gun. Now for the kicker. There was no guarantee that this position would have an open view of the President. Just standing there milling about with other visitors made this apparent to me. I was trying to track the cars coming down the road and aim at them as an assassin would when I realized that there were all sorts of people in the way. It defies any reason for someone to plan to set up on the grassy knoll fence to shoot the President. There was no cover and no guarantee of a clear shooting angle. A very poor plan to take out the leader of the free world.

The Sixth Floor Is Ideal

On the other hand, when you take a look out the window on the sixth floor of the School Book Depository, you realize quickly this is an ideal location. The pitch of the road (which goes slightly down hill) almost perfectly matches the angle from the sixth floor. That is, as a car travels down the road past the grassy knoll, the gun angle would not have to change to stay focused on the target in the car. You cannot view this from the window Oswald used with the boxes set up to prop up the gun and obscure him from being seen – the actual window used for the shooting – but you can look out from the adjacent window. The angles are very similar and the conclusion is quite chilling. With a weapon resting on a box, you can see how snapping off several rounds accurately would quite easy.

Okay, so that’s my small contribution to the analysis of the assassination of President Kennedy. My conclusion: Oswald acted alone.